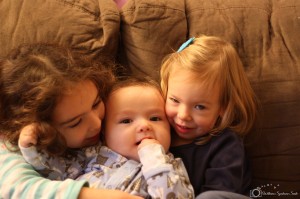 A couple months ago, we were driving back from visiting my sister, who lives near a beach. While the kids slept in the backseat, Dan and I talked about how relaxing it felt to be by the water for a few days. For years, we’d been saying that we’d like to move near a beach. But it just seemed so impractical. We had built a life elsewhere. A move would be difficult, especially with three little kids.

But we had said this many times before…and then life happened…and we pushed that dream aside. However, this time seemed different. It felt like we were finally serious. Within a few days of getting home, Dan called a realtor about putting our house on the market, and we started to research houses in a town near the beach.

With the wheels actually in motion, my initial excitement turned into nervousness. I had fears — lots of them! We would have to take the girls out of a school that they love. We would be moving farther away from family. We would have to change doctors and dentists. We would have to leave Emmy’s wonderful music therapist. We would have to work with a new school system to arrange physical, occupational, and speech therapy. Overall, we would be leaving everything that was familiar.

One day, when we were scheduled to meet with our realtor, I broached my fears to Dan. “Is this really a good idea? I feel like I know this area so well. I’m nervous about making such a big change.”

He reassured me that everything would work out. And I realized then that if I always listen to my fearful side, I would never do anything. I would stay put exactly as I am.

I actually had a lot of trepidation about starting this blog a year and a half ago. I knew I wanted my blog to be very personal and honest, so I worried about the reaction that I would get. I worried about “putting my business out there” for everyone to see. And, most importantly, I worried about posting pictures of my children.

I really hemmed and hawed on the pictures issue. Should I just take pictures of the kids from behind? Did I really want to expose their faces? What about the creeps out there? The thing that tipped the scales for me was that Williams syndrome can be a very overwhelming and scary diagnosis. I wanted to show newly diagnosed parents what Emmy looks like — how beautiful and sweet she is. I felt like you might be able to get a more accurate impression of who Emmy is from seeing her face. See how Williams syndrome isn’t as scary as it sounds? 🙂 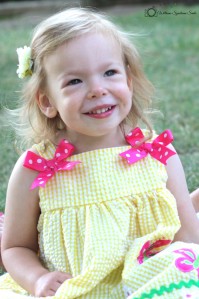 So I pushed past all of those fears to start this blog, and I’m happy that I did! I love hearing from people who find my blog. I love showing what Williams syndrome is, and I love writing about how Emmy has changed all of our lives for the better.

I emailed a realtor who was familiar with a town that we liked and wrote: “We’d like to move, and we’d like to do it quickly. We have three little kids and the holidays are coming up, so we want to just go for it sooner rather than later. Can you help us?” We lucked out, and she was awesome. Soon, all of the pieces fell into place for both the selling and buying of our old and new houses. With momentum on our side, Dan and I moved at warped speed to move before the holidays.

And we did! We’re in the new house in a brand new town near the beach!

We have floor to ceiling boxes, and we still have a ton of unpacking and rearranging to do. But we’re here!!

I think that our biggest concern this whole time was for Charlotte. We were pulling her out of a Kindergarten that she absolutely loves and transferring her to a bigger school with brand new teachers and friends. My own family moved when I was going into sixth grade, and I have to tell you that I was TRAUMATIZED. The memory of the first day of school still haunts me to this day. I can feel my palms getting sweaty just THINKING about it. Ugh. So we felt terrible about changing Charlotte’s comfortable surroundings.

But on the first day in her new school (this past Monday), a little girl brought in a picture frame that she made over the weekend for Charlotte! I couldn’t believe it. Several other kids brought in cards that said things like: “Charlotte — welcome to our school.” Those kind gestures helped her so very much on what would’ve been a difficult first day. I vowed that when I hear there’s a new kid coming to town, I’m going to encourage my children to make cards for him/her. It was really, really sweet.

So the first full week of school is in the books! Charlotte is starting to make friends and is really enjoying her classes, and Emmy fit in right away. Emmy goes to the preschool program and, if you read about the “Williams syndrome personality,” you’ll see why she’s so friendly and outgoing.

So there we go. Lots of changes! But through all of this, I’ve learned that when I move past fear to take a chance, I will eventually embrace change. 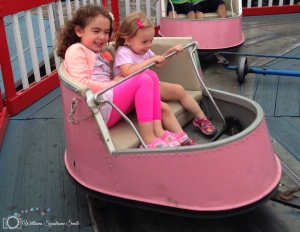